Lazarus will be given a new life in a new light on May 2 at 8pm at the Kings Theatre in Brooklyn.

For the first time and for one night only, the theatrical premiere of a film of Lazarus’s London production will be soundtracked in the flesh by the actual band who brought the show to life in New York. Not only will fans who were unable to score tickets to Lazarus’s sold out New York run finally be able to see the show on the silver screen—they will have the unique and unprecedented experience of seeing the film with the music played in its entirety by the seven-piece band that backed Michael C. Hall and the Lazarus cast beginning with the show’s December 7, 2015 opening in New York City.

Lazarus features of nearly 20 songs spanning the Bowie catalogue personally rearranged by David Bowie and Henry Hey, from singles (“Heroes,” “Changes,” “Life On Mars?”) to deep cuts (“Always Crashing in the Same Car,” “It’s No Game (Part 1),” “Dirty Boys”) to the four songs written specifically for the show (“Lazarus,” “No Plan,” “Killing a Little Time,” “When I Met You”). The Lazarus film/live soundtrack experience will mark the first time that these musicians have played these songs live since the January 20, 2016 finale of the show’s New York run.

Written by Bowie and Enda Walsh, Lazarus was inspired by Walter Tevis’s novel The Man Who Fell to Earth, and starred Michael C. Hall as Thomas Jerome Newton, the character Bowie portrayed in the 1976 film adaptation of that book. Directed by Ivo Van Hove and produced by Robert Fox, Lazarus opened December 7, 2015 at the New York Theatre Workshop to great critical acclaim. The New York Times raved “Ice-cold bolts of ecstasy shoot like novas through the glamorous muddle and murk of Lazarus, the great-sounding, great-looking and mind-numbing new musical built around songs by David Bowie,” while Rolling Stone hailed it as a “Surrealistic Tour de Force… milk-swimming, lingerie-sniffing, gin-chugging theater at its finest.” Tickets to the entire New York run of Lazarus sold out within hours of going on sale. The sold out London production of Lazarus, which was filmed for the May 2 event, had an exclusive limited run at the specially built Kings Cross Theatre from November 8, 2016 to January 22, 2017.

Lazarus The Motion Picture/Live Soundtrack Experience is presented by Live Nation in association with RZO Productions, Inc., under license from David Bowie Archive. All net proceeds from this show will be donated to Public Programs at the Brooklyn Museum including monthly, talks, performances, and screenings. 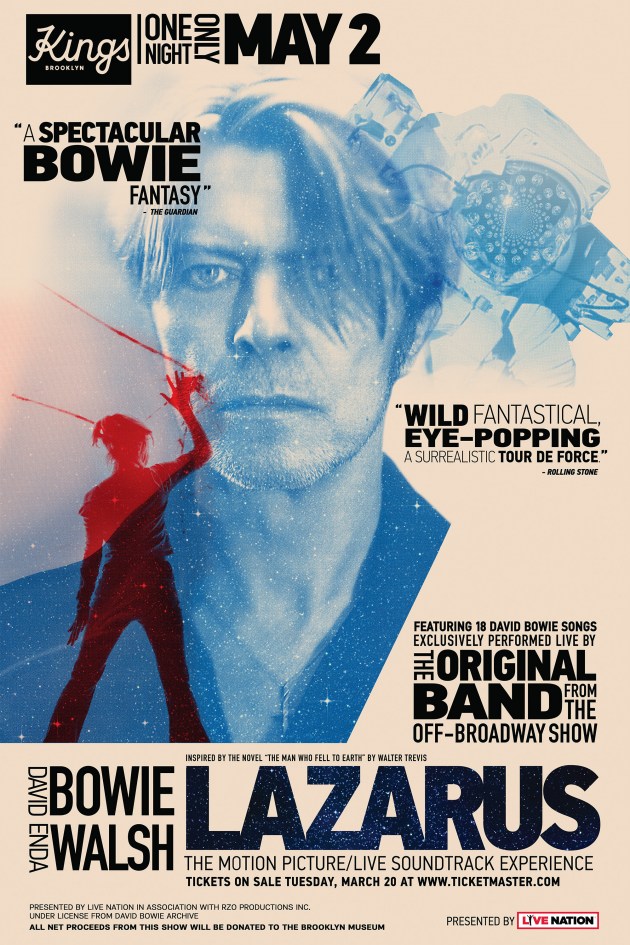 Standing alongside the cast’s interpretations of classics from his canon are the three final David Bowie studio recordings. Co-produced by Bowie and Tony Visconti and recorded with Donny McCaslin and his quartet, the same band that played on Bowie’s BLACKSTAR album, these last three songs — “No Plan,” “Killing A Little Time,” “When I Met You”— bring completely new dimensions to their cast counterparts. The original BLACKSTAR version of “Lazarus” is also included on the cast album.

The Lazarus cast album was produced by the show’s musical director Henry Hey, who had previously worked with Bowie on “The Next Day” and features vocals from Hall, Caruso, Cristin Milioti, Michael Esper and other cast members backed by the seven-piece house band Hey assembled for the New York run. The album was recorded January 11, 2016. Upon arriving at the studio, the musicians and cast were shocked and saddened to learn that Bowie had passed away the evening before. Their emotional performances that day are captured on this recording.

The Lazarus Standard Vinyl includes 3 x 180 gram lps presented in a gatefold jacket with an 8-page booklet, and including a digital D/L card. The distinctive artwork for the Lazarus cast recording has been designed by Jonathan Barnbrook who also worked with Bowie on the BLACKSTAR, The Next Day, Heathen and Nothing Has Changed albums.